Player efficiency rating is a statistic I've developed over the years to measure a player's effectiveness.

This rating is somewhat similar to a quarterback rating in the nfl but far more meaningful and useful (IMNSHO). 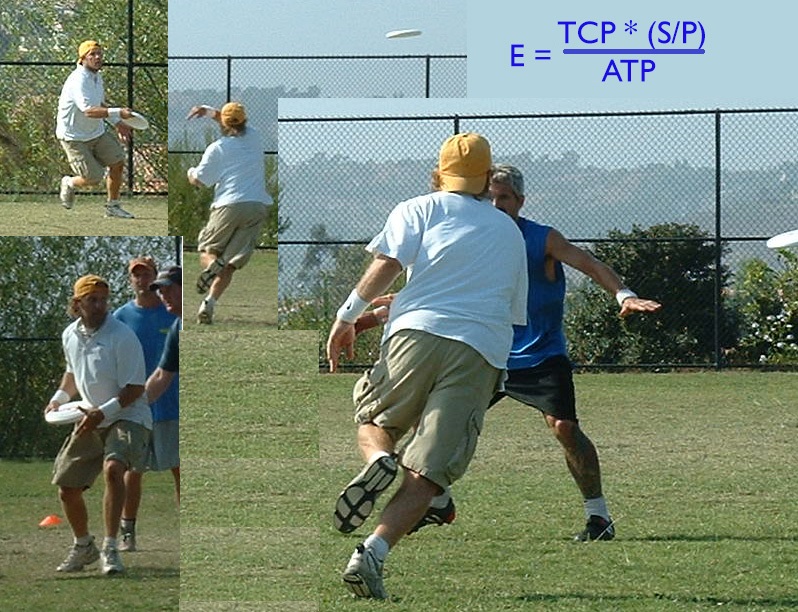 Completion Percentage (CP)  is simly the percent of completions you connect on every time you have the disc.

This has to be objectively measured so turnovers as a result of travels, stalls, etc. are all "not completions" so they basically count as incompletions; if you throw a perfect pass, and your receiver drops it, it's not a completion.

Secondarily, a very valuable stat to maintain is the concept of an ITO, or in other words, an indirect turnover.  It simply means that if I throw to you, and you throw it away, I get an ITO in my stats.

This measures how well a player is making those around him better (or not). You could have a player that throws 100% in a game, but if he has 15 ITOs, there is obviously something wrong that needs attention.

ITO is a very interesting stat.  If you're always throwing to a player very close to the sidelines, chances are you're going to have a lot of ITOs.  If you throw a lot of scoobers, you'll have higher ITOs because upside down passes frequently result in subsequent turnovers.

TCP is the calculation made from combining CP and ICP (Indirect Completion Percentage).  You don't just add the two numbers of course.  You add up all the completed direct and indirect throws and divide by the total number of direct and indirect opportunities.

The scoring ratio is somewhat similar to the old +/-  (plus-minus) stat but it just means how many points, when you were on the field, did your team score.

If your team never had possession on a given point, it doesn't count as an actual point for the purposes of this stat.  Also, if you had 5 possessions over a single point, it still just counts as one point. Furthermore, even if you personally never touched the disc on a given point, if you were on the field during that point, it counts towards your scoring ratio.

If your team had the disc on 4 points, and your team only scored on three of those, your S/P would obviously be 0.75.

The bottom line (Divisor) in the Equation for Player Efficiency is ATP.  This is how long the disc is in the thrower's hand, on average, every time he has the disc.  This clock starts the nanosecond a catch is made (so if a player catches the disc and takes 8 steps to set a pivot, the clock is running the whole time he's got the disc in his hand).

a good recommendation for all players is to have an ATP of 1000 ms or 1 second.  If you can achieve an average of 1 second, the divisor in the equation goes away and E simply is TCP * scoring ratio.

**The most complete and comprehensive form of ATP is TATP which means an aggregate between a player's individual ATP and IATP (Indirect ATP).  IATP is the cumulative (ATP) of the receivers of all your passes.  In other words, if you're focused on maintaining a TATP of 1000ms or lower, you'll avoid throwing to players who hold on to disc for a long time and have an ATP of >1500ms.

PER is a useful and powerful metric for measuring an individual's, as well as a team's (or even subset of a team') efficiency.  How much total work is being expended per catch, per throw, per point, per game and per tournament.  Players with a high PER (1.0 or higher) are requiring far less overall calories to be burnt per point than players with low PER (less than 0.50).

In the above example, if you've got a player who averages a 5 count every time he has the disc, his Efficiency Rating is a 0.12 which is utterly horrible.  Someone like a Dylan Freechild can release the disc within 50-100ms at his quickest so getting an average of 1.0 isn't too difficult if that's what you set your intention on doing.

If you achieve 100% on throws and indirect throws, and your squad scores every point you're on the field and you get rid of the disc, on average, in about 1/2 second, you can get an E Rating of 2 which would be incredible, but doable.

Most players probably have a PER around 0.2-0.4. In other words, not very efficient.

You could argue that encouraging players to average 1.0 seconds for ATP will tend to cause players to rush and make mistakes, but that's the whole point of formulating the equation the way that it has been.  By having the divisor in the equation be indicative of quickness and having the dividend comprised of numbers for measuring proficiency, you're tying the two things together.  Taken as a whole, the equation says 'throw as quickly as possible but don't turn the disc over while at the same time making sure you put your teammates in the best position to succeed as well".

If you do turn the disc over, do everything you can to get the disc back and score so your s/p ratio is as close to 1 as possible. This makes defensive prowess an element in the overall efficiency rating as well.

this is a very comprehensive and very meaningful statistic.

In this one equation, players are objectively rated for their selflessness, collaboration, proficiency, field vision, quickness and decision making ability, all in one calculation.

You could even, if you wanted to, calculate efficiency for your entire team, for an entire tournament or calculate it just for subsets of players and see which groups of players are more efficient when working together.

as opposed to the QB rating in the nfl, PER applies to all the players on the field, not just a single quarterback and once a given player understands the equation and focuses on tweaking their own individual performance to improve their personal PER, this equation becomes highly valuable as a tool for fine tuning a player's offensive output.

Furthermore, this quotient is fairly easy to calculate retroactively by going back and observing game footage after a tournament or whatever and tabulating the elemental stats.  Matt beeman, STATISTICIAN for the raleigh flyers, has been doing this for previous games this season and has been coming up with some interesting graphs and charts.

If you went to your team with this and did nothing else except to challenge everyone to achieve a PER of 1.0, you'd win natties.  You'd crush everyone else.  You'd also be virtually impossible to defend.  Instead of valuing things like hard in-cuts, "patience", athleticism, brute force, hard throws (both catching and receiving) and endurance/stamina (none of which are necessarily team oriented values), if a team embraced a framework based on optimizing efficiency (individual and team), there's no way anyone could compete with you.

Efficiency is hugely important over weekend tournaments, especially in 4 day tournament like natties.  Obviously, a team that is significantly less efficient is going to burn tens of thousands more calories over a weekend than it's efficient counterpart.

Additionally, the inefficient team will also incur significantly more injuries because of stress and fatigue factors and also will make dramatically more execution errors.  This equation takes core team values from being abstract, subjective and indeterministic concepts and transforms them into concrete, objective, measurable and tangible numbers.

Maintaining, optimizing and encouraging a high Efficiency Percentage says "here are our team's values, [selflessness, collaboration, proficiency, field vision, quickness and decision making ability] and here's how we're going to evaluate players' ability to adhere to what we value as an organization".